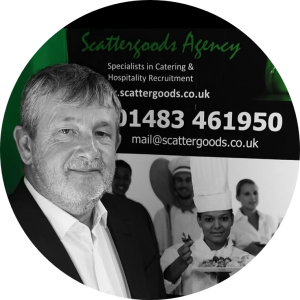 Andrew joined Scattergoods as Office Manager in 1997. Andrew previously worked as a chef for 14 years in fine dining restaurants and contract units within the Home Counties and London, his last position was Head Chef at Sony, UK. Andrew became Managing Director of Scattergoods in October 2002 on the retirement of Philip Scattergood (founder of Scattergoods Agency Ltd).

Outside of working hours, Andrew enjoys all things outdoors with his family and is currently taking his Private Pilots Licence. 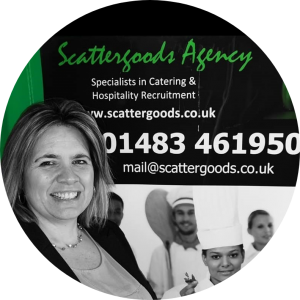 Claire has been recruiting for the Catering & Hospitality industry since 1999, both on a temporary and permanent basis, and joined Scattergoods Agency in the summer of 2006.  Having worked for both high street and independent agencies within the Surrey area, she has a wealth of local area and industry knowledge.  As well as previous hands on catering experience working front of house, Claire also worked within Sales and Marketing for the National Accounts Division of Procter & Gamble UK.  Claire took over as Commercial Manager at Scattergoods Agency in June 2012.  When it comes to recruiting, she believes in offering an honest and personal service to clients and candidates, and is totally committed to providing the very best in recruitment assistance for the Catering & Hospitality Industry in the Surrey and Hampshire area.

Away from the office, Claire enjoys a new found love for baking and making creative cakes, although mainly she has her hands full with her Cocker Spaniel, Harvey . . . Who often visits the office! 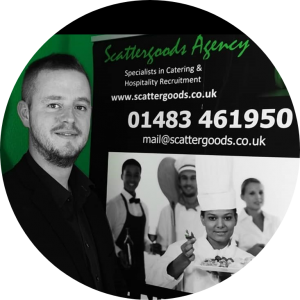 With 8 years’ experience within Hotels, Pubs & Restaurants as a Chef, Waiter, Bar, Bellhop & KP within fine dining; Darren furthered his experience by entering the Catering & Hospitality Recruitment Market back in March 2008. He joined Scattergood’s as a Consultant within the Temporary Department in 2012 and worked his way up to Management in June 2016.

Away from work life, Darren has a passion for motorbikes; having motorcycled around the Alps – twice! He has raced both off-road and short circuit at a competitive level.  He is the current Rookie Thunderbike Sport Champion with the British Motorcycle Racing Club.

His other passion is football having followed Portsmouth FC as a season ticket holder following both home and away games.

Other than that – Darren describes himself as a Panda – he would quite happily sleep and eat all day if he had the choice. 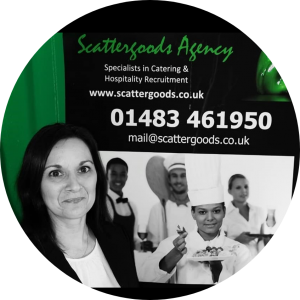 Kim has been recruiting for the Catering & Hospitality Industry since 2004, both on a temporary and permanent basis and joined Scattergoods Agency in October 2014 as the Resourcer for the Permanent Department. Having worked for another independent high street agency in Surrey for the past 10 Years she has a great knowledge of the local market. Kim’s career in the Hospitality Industry started after graduating with a BA Hons in International Hospitality Management in 2001 when she joined a Large Pub/Restaurant group and worked her way up the management ladder. She also has experience working in a Private Health Club working in all departments including Food & Beverage, Conference & Banqueting, Sales & Marketing, Reception and even the Gym! Kim loves to develop her knowledge and be able to add value and completed her Level 3 CIPD in June 2015. Kim is all about making sure both clients and candidates get the best possible service.

Outside of work Kim loves Spinning at the gym, however after having a little boy at the end of 2013 it’s mainly about the chocolate and soft play these days! 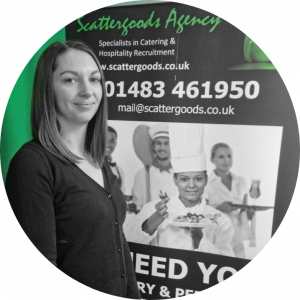 Siobhán has 10 years’ experience working in the hospitality industry in a variety of roles including Food & Beverage, Rooms Division and Spa. Her career started as a fine dining waitress while completing a BA Degree in Hospitality Management. Once qualified Siobhán joined the 5 star team in Four Seasons Hotel in Dublin. Following a move to London Siobhán was promoted to management within Front Office. Before joining Scattergood’s Agency, Siobhán worked as Concierge Manager at the Four Seasons Hotel Hampshire.

When Siobhán is not working her passions include horse riding and travelling, her last adventure took her all the way to South Africa. 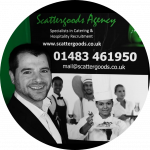 Lee initially joined Scattergoods in 2017 and following a couple of years recruiting within the rail sector, Lee is delighted to be back with the Scattergoods Team and is enjoying catching up with our temporary staff and clients.

Coming from a hospitality background of management roles within local catering and hospitality venues, which included acting as General Manager of the local, Jolly Farmer pub, Lee prides himself on understanding hospitality from both the client and staff’s perspectives.

Away from the office, Lee is heavily involved in local cricket, as Chairman for both his own club and of a local ladies league. He lives in Liphook with his partner, her young son and their cat/tormentor of local wildlife, Basil!! 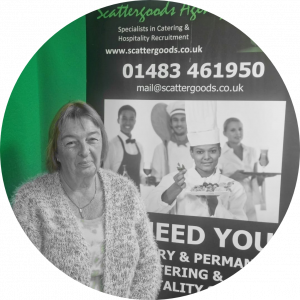 Karen Elson started at Scattergood’s Agency in August 1999, having worked on the clerical side of the business for many years!

She is now the Accounts Manager having worked her way up and trained to become MAAT qualified.

The accounts department function plays a key part in delivering a good service to our clients and workers alike.

They take great pride in ensuring all our workers and suppliers are always paid on time and I do my best to get clients to pay within agreed terms in a polite manner!

Outside of work, she now has grandchildren who like to wear her out!   She also likes to travel and have been to some beautiful warm countries and take in the cultures. 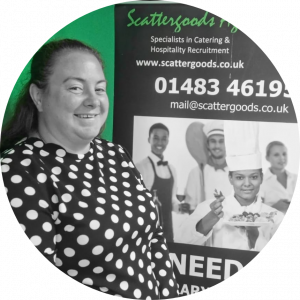 Rachel joined Scattergoods in December 2011 after working in the food industry since she left school.  Alongside this Rachel achieved a maths degree, and after joining the accounts department at Scattergoods went on to successfully complete her AAT qualification.

Outside of the office Rachel participates in a variety of dance fitness classes, is a committed leader of the local Brownie group and enjoys spending time with her family. 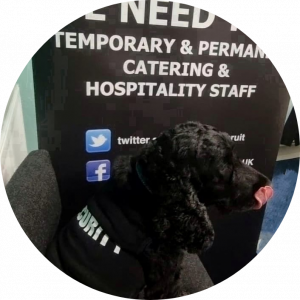 Harvey joined Scattergoods back in 2014 after a successful career monitoring Claire’s front door from potential intruders.

Upon his arrival – he made an instant impact with Scattergoods; proving his worth by guarding an empty milk bottle from the Shalford Mafia, AKA Shalford Parish Council, for 10 consecutive hours. Legend has it – the bottle is somewhere hidden in the garden to this day.

Although security is a full time job; Harvey doesn’t hesitate to help his team mates by shredding, hovering up crumbs and meeting & greeting visitors.  In his spare time; he likes having his tummy rubbed, going for walks, eating pretty much anything or lazing around in the sunshine.  He can often be found snoozing on the job!  Despite lots of new grey hair appearing on a daily basis; he’s refusing to contemplate retirement!